Say hello to my councilmember at tonight’s Streets For All virtual happy hour.

And tell her we need more protected bike lanes, fewer cars and a safe crosstown bikeway.

Among many other things.

As I was working on today’s post, I received a press release from Streets Are For Everyone, aka SAFE, the traffic safety advocacy umbrella group supporting Damien Kevitt’s Finish The Ride.

What they have to say is important enough that I am including the entire press release verbatim.

Because too damn many people are dying on the mean streets of Los Angeles. And not enough is being done to change that.

2022 Traffic Fatalities are at a Record High

Streets Are For Everyone, a Southern California-based road safety advocacy group has released a report called “Dying on the Streets of Los Angeles” about traffic fatalities in LA for 2022. The number of people killed in traffic violence on the streets of Los Angeles has seen record highs.

The report breaks down the numbers, who’s been most impacted, and what’s behind the numbers. More importantly, the report lays out 4 action items that Mayor Bass and the LA City Council need to take to start turning these numbers around.

Highlights of “Dying on the Streets of Los Angeles”

(The full report, including links to source data, can be found on the Streets Are For Everyone website by clicking here.)

There were 309 traffic fatalities in 2022, breaking the 300 mark for the first time in over 20 years, which is how far back we have records. This was an increase of five percent from the previous year and a staggering 28% increase over 2020. 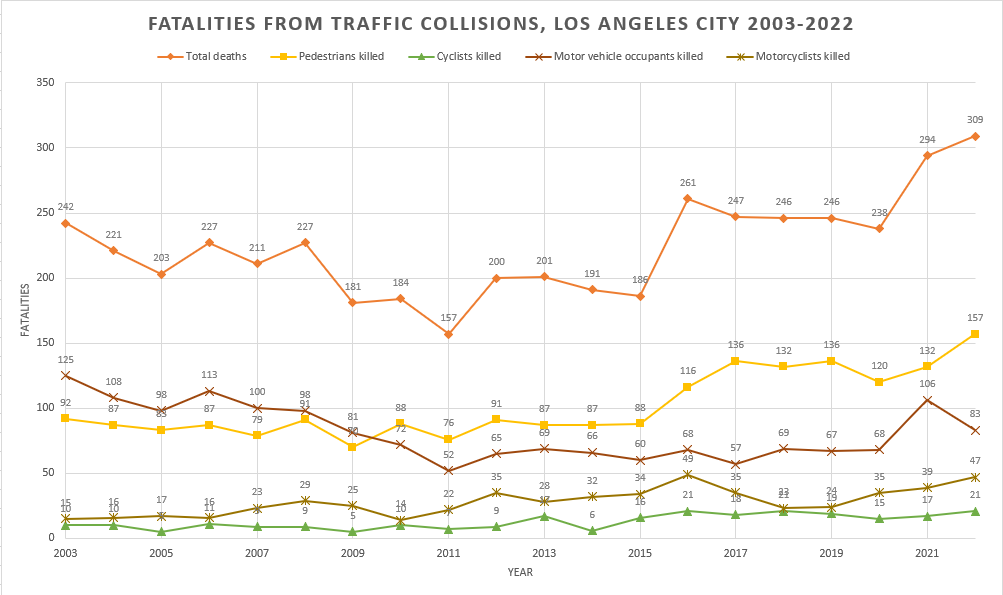 Source: City of Los Angeles Open Data Portal. Taken from LAPD records. 2022 figures are preliminary and subject to change as data is reviewed and finalized.

This is a tragedy made worse by the fact that vulnerable road users – pedestrians and cyclists – are impacted the most by traffic violence in Los Angeles. Pedestrian fatalities were up by 19% (157 lives lost, also the highest in 20 years). Bicycle fatalities also increased by 24% (21 lives lost).

What is Behind the Numbers? SPEED!

We wanted to see what was behind these fatalities — what were the primary collision factors (PCF), as they are called by law enforcement. The resounding answer is speed. Speeding is the primary collision factor in 34.8% of the collisions in LA, resulting in some degree of injury or fatalities. Speed has been the largest PCF every year since 2010 but has worsened significantly since 2020. 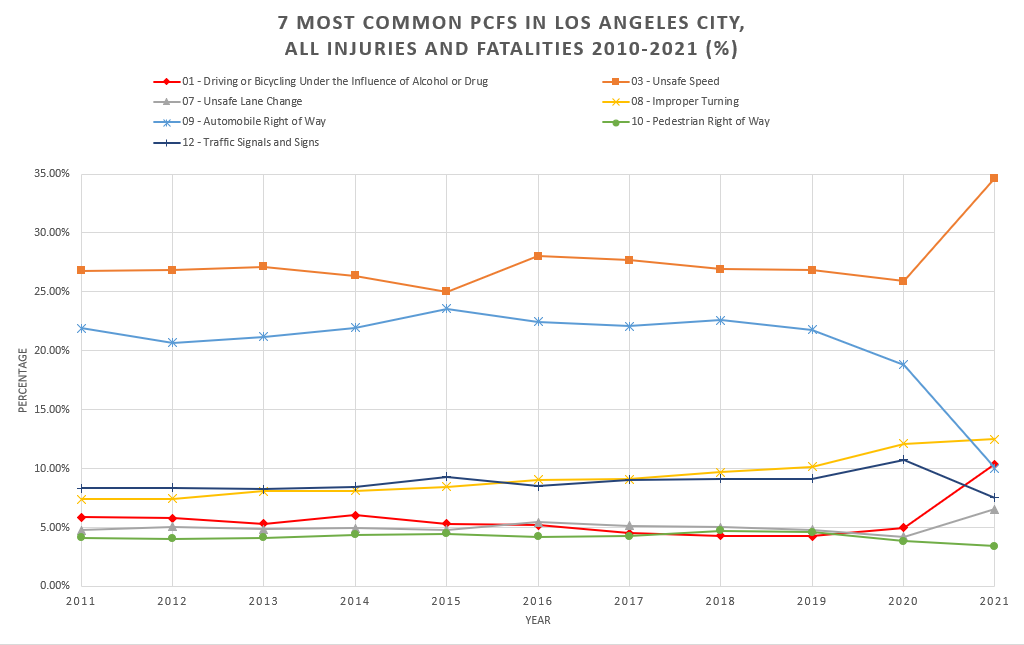 The Vision Zero strategy was initiated in 2015 by the then mayor, Eric Garcetti, to protect the most vulnerable road users and reduce traffic fatalities to zero by 2025. It launched with an impressive roll-out of grand plans, but, by statistics, it has largely been a failure, suffering from a lack of political will, lack of funding, and now, severe staff shortages.

In the 2022-2023 LA City fiscal budget, $50.6 million was allocated to LA DOT for Vision Zero related projects. This is a drop in the bucket compared to what cities that are serious about saving lives spend. For example, the City of New York, with fewer miles of streets – 6300 miles in New York City compared to 6614 miles in LA City – spent over $270 million on its Vision Zero program in the 2019 fiscal year alone. It also had fewer traffic fatalities than Los Angeles in 2021 (273 in NY compared to 294 in LA) with twice the number of people living there.

To make things worse in LA, due to a severe staffing shortage at LA DOT — per a May 2022 LAist Article, 50% of the Vision Zero and Active Transportation positions remain unfilled — approximately 15 million dollars for traffic signal upgrades was left unspent in 2021. That money rolled over to the 2022 budget. Many of those positions are still yet to be filled due to an understaffed and overloaded City of LA Personnel Department.

What Needs to be Done

If Mayor Bass and our City Councilmembers, many of them newly elected, are serious about actually saving lives on the streets of Los Angeles, they are going to have to make some drastic changes related to Vision Zero, not just for one year but for many years. SAFE’s 4 recommendations are:

On the morning of Saturday, 21 January 2023, (weather permitting) SAFE along with many other concerned non-profits and community groups will be holding a die-in protest/press conference on the steps of City Hall to follow up and voice our demands for effective action to save lives on the streets of Los Angles.

Anyone who wishes to participate in the protest can sign-up here.

The National Highway Traffic Safety Administration, aka NHTSA, reports that traffic collisions cost American society a whopping $340 billion in 2019, or more than $1,000 per person on the country.

Three-quarters of that amount is paid by people who aren’t directly involved in the crashes, through higher insurance premiums, taxes, lost time from road congestion, excess fuel consumption and environmental impacts.

Which means that you pay the cost of traffic violence, even if you don’t own a car.

Streetsblog’s Joe Linton took a deep dive into Metro’s plan to “improve” the SR-57/SR-60 interchange, offering six detailed reasons why the Metro Board should drive a stake through the damn thing’s heart — including that the minimal bike infrastructure they recently added doesn’t meet, let alone improve on, the bicycling component of Diamond Bar’s general plan.

It’s long past time to stop flushing our tax money down the toilet with climate-damaging, congestion-inducing highway projects.

That feeling when your new ebike arrives looking like it fell off the truck.

But surprisingly turns out okay, anyway.

The war on cars may be a myth, but the war on bikes just keeps on going.

No bias here. The speaker of the North Carolina House says Charlotte NC needs to focus on road capacity, not bike lanes, if the city wants support from the legislature, even after a 30-year old woman was killed by a driver while riding an ebike.

But sometimes, it’s the people on two wheels behaving badly.

Of all the many practical uses for a bicycle, throwing one at a moving train usually isn’t considered one of them. Police in Colorado are looking for a man who tossed his bike at a moving train, causing $6,000 in damage.

The NRDC calls plans to build bus lanes and extend the protected bike lanes on Venice Blvd, among other transportation improvements, a win for transportation and the climate.

Pasadena approved plans to spend $182,700 for a citywide traffic safety media and outreach campaign. Because apparently, it’s more effective to tell people to drive safely than to fix the streets to ensure they do.

Popular Dallas Fort Worth bike shop Cadence Cyclery has opened their fifth location, and first outside of Texas, on Highway 101 in Encinitas.

Students at Cal Berkeley are pushing a proposal to ban cars from a few blocks of iconic Telegraph Ave above the university.

This is who we share the road with. Or maybe what, as video captures a Tesla in Full Self Driving mode suddenly swerve into the left lane and brake to a stop in front of oncoming traffic on the San Francisco Bay Bridge, causing a massive chain reaction crash. But somehow, we’re supposed to believe these cars are safe enough to ride a bike next to. Then again, they’re probably no worse than many of the human drivers we share the road with.

San Francisco proposes banning traffic stops for nine minor violations that are frequently used for pretext stops, in a city where Blacks make up just 5% of the population but account for 19% of traffic stops.

They say that like it’s a bad thing. Fox News reports the Biden Administration wants Americans to walk and bike more in an effort to eliminate climate harming emissions by 2050.

In a story that could just as well come from Los Angeles — or virtually any other American city — a Northwest website says dangerous drivers make commuting difficult for Seattle bicyclists, in part due to drivers parking in unprotected bike lanes. Although here in LA, they park in the protected ones, too.

Michigan’s Detroit Bikes is taking deposits on their new 32-pound, belt drive American-made ebike, which doesn’t look at all like one. Meanwhile, ebike prices continue to drop, as SWFT reduces the price of their e-cruiser bike to just $650.

No longer the Mistake by the Lake, Cleveland approves $54 million in bikeway improvements, including a 4.3-mile protected bike lane and a 1.7-mile off-street two-way cycle track.

More proof just how worthless sharrows are, as a New York woman riding a bikeshare ebike was killed when she was rear-ended by a truck driver, after the protected bike lane she was riding in suddenly ended and became sharrows, forcing her into the traffic lane in front of the driver who killed her.

Two women from Belgium testified in the terrorism trial of 34-year old Sayfullo Saipov, who is accused of killing eight people in a murderous rampage driving a rented pickup down a Manhattan bike path; one of the women lost her sister in the attack, while the other lost both legs.

Life is cheap in Florida, where a West Palm Beach drawbridge operator was sentenced to spend a whole two days behind bars, after accepting a manslaughter plea in the death of a bike-riding woman who fell through the gap when the bridge opened while she was on it. But she walked right away, anyway, after being released on time served.

A Toronto mom couldn’t find a bike helmet to fit her Sikh sons’ turbans, so she did what any other mom would do — design and build her own.

No surprise here, as a new study shows the UK is hopelessly locked into car culture, with 47% saying they have no alternative to owning a car, and 71% says they expect to always own one.

An Irish semi truck driver changed his plea to guilty on a reduced count of careless driving in the death of a 54-year old man who went over his handlebars after the driver passed him with less than 20 inches to spare; the judge has told him to expect jail time when he’s sentenced next month.

Copenhagen-based Newton-Rider is introducing what they call the first foldable, semi-soft bike helmet, which uses a proprietary non-Newtonian thermoplastic elastomer to protect your skull.

An eight-year old Indian girl is nearing the end of a nearly 3,000-mile bicycle ride from Kashmir to Kanyakumari, accompanied by her bike-riding father, to call attention to the need to “Save the girl child” and protect the environment.

Life is cheap in New Zealand, where a truck driver faces just three months behind bars after being charged with careless driving in the death of a 28-year old woman riding a bike.

The Guardian conveniently helps you plan your next tour Down Under, with a guide to the best place to ride a bike in Australia for every month of the year.

The Isle of Wight won’t be included in this year’s Tour of Britain, despite speculation after the final leg of last year’s race, which was scheduled for the Island, was cancelled when Queen Elizabeth died.

Your next ebike could be made of plywood. That feeling when a bike ride turns into an opera on two wheels.

And a new book tells the true story of setting out for a short bike ride to get over a breakup, and coming back home two years later.

Be safe, and stay healthy. And get vaccinated, already.

Oh, and fuck Putin, too.

This site uses Akismet to reduce spam. Learn how your comment data is processed.